What do tennis greats Bjorn Borg, John McEnroe, Chris Evert, and Rafael Nadal have in common, and what can they teach you about investing?

Do you remember watching Bjorn Borg play tennis during the 1970’s? He won 6 French Open and 5 consecutive Wimbledon titles between 1974 and 1981, becoming the top ranked male player from 1977 through 1980. Borg was nothing if not steady, consistent, and cool-headed. He wasn’t overpowering physically, but was dominant mentally. Good luck trying to outlast or out-tough this guy! By the end of his matches, his opponents were worn out, mostly because of Borg’s precision, but also his looping but effective topspin and remarkably consistent groundstrokes.

I still remember his classic 1980 Wimbledon finals win over John McEnroe. Johnny Mac got out to a fast start by blitzing Borg in the first set, but the Swede won sets 2 and 3, and even had a couple championship points at 5-4 in the fourth set. But McEnroe ended up winning the fourth set, by prevailing in a classic 34-point tiebreaker, 18 points to 16. This amazing tiebreaker is still talked about today, especially amongst those lucky enough to have seen it live. In the end, Borg was able to recover and take the fifth and final set, but it was clear a new competitor had arrived. What a contrast! McEnroe played a serve & volley game, keeping points short and, typically, dominating his serving games. Borg preferred to stay on the baseline and rely on steady, precision-placed passing shots. Their games couldn’t have been more different, and their personalities were complete opposites as well. Bjorn was almost icy cold on the court, never arguing a call or seeming to get upset, whereas John’s signature line became “You cannot be serious” after arguing call after call, and acting, many times, like a spoiled teenager on the court. He quite literally wore his emotions on his sleeve.

Another great rivalry from the same era was Chris Evert against Martina Navratilova on the women’s side of tennis during the 1970’s. Similar in some ways to Borg, Chris Evert was a baseliner, steady and accurate with her groundstrokes, winning many matches by keeping her cool and demonstrating amazing consistency and self-control. Evert won 18 Grand Slam singles titles and was the #1 women’s player from 1974-78 and again from 1980-81. From Florida, Chrissie achieved the highest winning percentage ever in the Open Era, winning 89.97% of her matches. And on clay, she was even better, winning 94.55% of her matches, also a record which still stands today. Navratilova was a serve & volley specialist, like McEnroe, who preferred to keep points short and overpower her opponents, especially when she was serving. Over time, Martina began to dominate her matches against Chris, which were typically in the finals of any given tournament. Chris was a perennial crowd favorite, but as time wore on, Martina improved her game and dominated women’s tennis, even against her friend and rival, Chris Evert. Over their careers, Martina won 10 out of 14 Grand Slam finals against Chris. 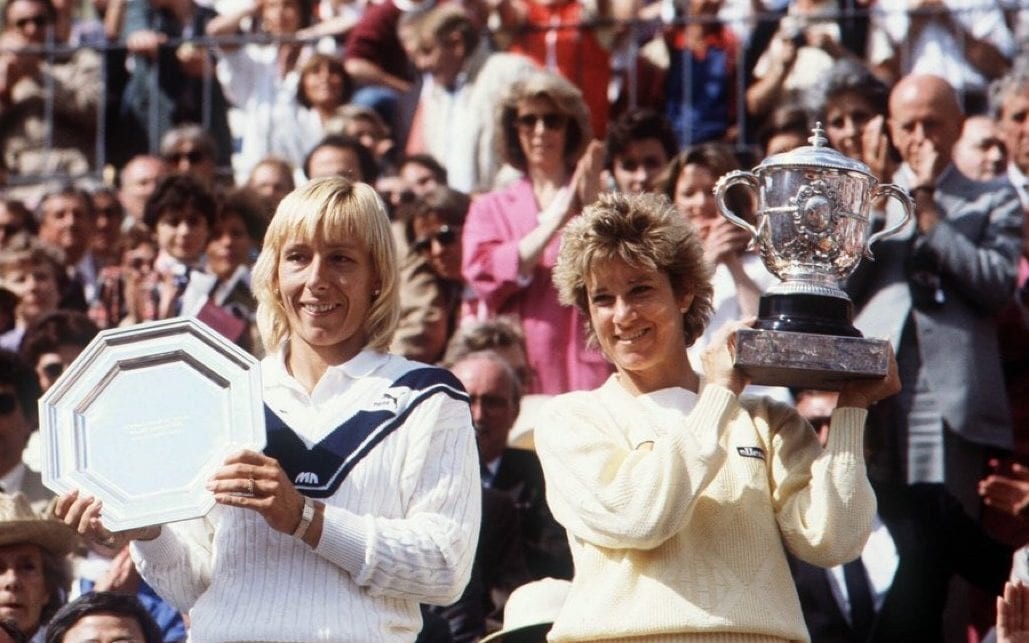 What’s the point of this trip down tennis’ memory lane, other than to irrevocably date myself? It’s really to illustrate that in tennis, it used to be possible to win using either style of play – i.e., serve & volley or baseline. In fact, for most of professional tennis’ rich history, serve & volleyers fought it out with baseliners year in and year out. There wasn’t really a dominant or preferred style that was thought to be superior. Today, that’s definitely changed. Baseliners dominate today’s game, while serve & volley players have become almost an anachronism. Rafael Nadal embodies today’s topspin-laden game, playing largely from the baseline but being able to hit nearly any location on the court, using angles that seem to defy physics at times. Rafa’s a tenacious competitor, every bit as icy-cold and even-tempered as Borg or Evert on the court. He’s a clay court specialist, but has learned to play well on any surface, so well in fact that he’s won 4 US Open titles, 2 Wimbledon titles, and 1 Australian Open title – not to mention his record 12 French Open titles! The Spaniard is amazing, improving every year while maintaining a mental toughness unparalleled in modern tennis. And when it comes to preparation and training, no one works harder or trains longer than Nadal. In a long, grueling match, it’s nearly always Rafa who seems freshest in the final set, winning the war of attrition time and time again. 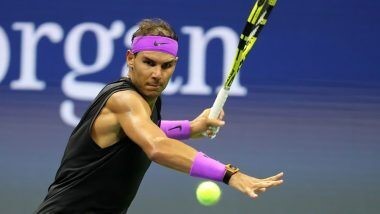 In my field, which is investing and financial planning, there are many parallels to tennis. Successful investment strategies and styles come into and out of favor, just like in tennis. For example, value investing (i.e., where stocks thought to be trading at a discount to their inherent value are purchased and held to benefit from the stock’s eventual return to its inherent value), has historically outperformed growth investing (i.e., where stocks of companies growing their revenues and earnings faster than the typical stock are bought at higher relative prices in hopes they’ll continue their supercharged growth phase). Over the years, value and growth rotate into and out of favor, but overall, value has been superior. However, more recently, growth stocks have done better than value stocks. Observers are wondering if investing has changed in a fundamental way such that growth stocks may continue to outperform value stocks for the foreseeable future, or even forever. It’s kind of like today’s tennis. Longstanding tennis fans are wondering if racket technology, strings, player conditioning and skillsets have changed the game in favor of baseliners permanently. Or will serve & volley someday make a comeback? At this point in time, we just don’t know the answer – to the changes seen recently in tennis, or in investing.

Racket technology has changed significantly over the years.

Another interesting parallel has to do with player consistency and mental toughness. In investing, letting emotions play a role in decision-making can cause erratic portfolio behavior and even destroy the best laid plans. Making investment decisions while in a stressed, or even euphoric, emotional state is not a good idea. Tennis players also, when they get mad or frustrated, typically don’t play their best. Most go down in a ball of flames once their emotions start to take over. This is definitely true of most amateur, club-level tennis players; and coincidentally, of most individual investors as well. Notably, John McEnroe was somehow able to contain and even channel his emotions into raising his level of tennis. In some matches where he seemed to come out flat or uninspired, he was sometimes able to argue calls, act like a teenager, and pull himself together in a way most players before or after haven’t been able to replicate.

Furthermore, having a steady, consistent, tough, even-tempered mindset was crucial to Borg and Evert, and Nadal as well, in wearing down their competitors during a match. Good investors many times share these traits, because investing for long-term goals, such as retirement, is a marathon and not a sprint. Like a 5-set Grand Slam tennis match, it doesn’t matter who comes out of the gate on fire, or who hits a few aces or winners in the first set, what matters is who stays the course and implements their plan through thick and thin. Financial planning and investing are very similar. Profiting from a ‘quick-hitter’ by buying and selling a stock within a couple months’ time may feel good and provide some bragging rights at the gym, but it’s not the end game. To win, investors must grind it out and persevere over the entire “match”, which in investing is your entire lifetime! Preparation and training are keys to success, just like in professional tennis, along with adapting to changes.

If you’d like to talk about the ‘good old days of tennis’, or learn more about investing and financial planning, I’d be honored to discuss either of these subjects with you. For me, these are lifelong passions, something I have always enjoyed watching, learning about, and keeping track of. As I age, I continue to enjoy watching tennis and seeing how it changes as players, technologies, and competition evolve. Financial planning and investing are also lifetime “sports” for me. I realize most people don’t enjoy finance like I do, which is why you might want to talk to someone like me who loves it enough to stay fresh and continuously “train and prepare” by monitoring changes, keeping up with trends, staying on top of best practices, and sticking with what works while making changes as necessary to stay current with the times and fine-tune strategies and approaches. For me, it’s not a job I go into the office to work on every day, it’s a lifelong pursuit of perfection, performance, and happiness. I enjoy the journey because it’s part of what I am, and who I am. It makes me happy. It’s what drives me. 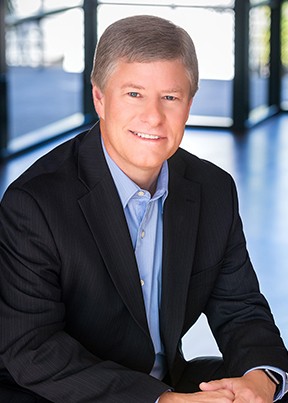 Scott McClatchey is a wealth advisor and CERTIFIED FINANCIAL PLANNERTM with WWM Financial in Carlsbad, CA. He can be contacted by phone on 760-692-5196 or by email at scott@wwmfinancial.com .

This commentary on this website reflects the personal opinions, viewpoints and analyses of the WWM Financial employees providing such comments, and should not be regarded as a description of advisory services provided by WWM Financial or performance returns of any WWM Financial Investments client. The views reflected in the commentary are subject to change at any time without notice. Nothing on this website constitutes investment advice, performance data or any recommendation that any particular security, portfolio of securities, transaction or investment strategy is suitable for any specific person. Any mention of a particular security and related performance data is not a recommendation to buy or sell that security. WWM Financial manages its clients’ accounts using a variety of investment techniques and strategies, which are not necessarily discussed in the commentary. Investments in securities involve the risk of loss. Past performance is no guarantee of future results.